All of humanity is psychologically disturbed…Every last one of us. Some more than others. 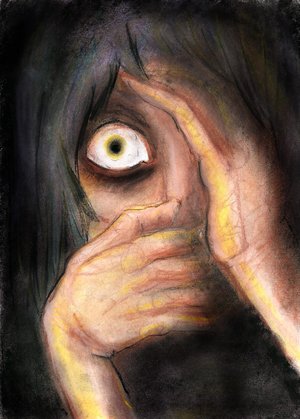 What does insanity make you do?

For example, what makes a matatu tout look you up and down to determine your worth; does he maybe feel wealthy by association, cool by association. Or is he ‘calling the wealth’ by being around the wealthy-looking, and ‘kicking poverty to the curb’ by keeping the ordinary and down-right poor at arm’s length? If he does this for 20 years but remains the same old tout trying to be something he’s not, then is it really working?

It’s insanity. He’ll never get what he doesn’t work for.

What is it that makes me want to slaughter a stranger, his entire family and everyone he’s ever spoken to because of a highly innappropriate pat he gave to my back? It might have been unconscious but it’s effect wasn’t dulled nonetheless. And the answer to that is – because I’m insane.

What makes a murder committed by a Pregnant Woman a non-crime. The imbalance of chemical secretions; especially those that make the monster in the mother take over to protect her offspring.

What makes you help a total stranger, take his hand, invite him into your house, feed him and send him on his way knowing very well he might be the death of you? it’s that part of insanity that makes you hear voices – when there are none – telling you that doing this particular good deed will bring you good fortune.

What makes one want to guard their lives from hurt and danger when they’re going to die anyway?

The insanity of Humanity.

Photo | AFP - Gibi Village in the aftermath of a fire that killed 30 people , destroyed homes and harvests. Gibi is in Gibo East's Kala Province.

Disclaimer: This article is strictly for personal practice

A fire yesterday spread through the Gibi Village of Kala Province, killing thirty people and injuring more than 100.

The badly injured were rushed to Kala Referral Hospital, while those with minor injuries were nursed on site by Red Cross Medical Personnel.

“We have at least 30 survivors of the fire admitted here,” said the Hospital Chief Resident, Raul Molopa, “But most of them are in stable condition.”

More than 20 of the Village’s thatched homes were also destroyed in the blaze, along with maize and sorghum harvests that the villagers had stored in silos.

The fire, according to Kala Fire Department Chief Alan Miruki began when a gas leak occurred within the village biogas project, and was exacerbated by a nearby open wood fire.

Mr Miruki insists that had it not been for Gibo East’s bad roads, his firemen would have quelled the fire before it could do any serious damage.

Gibo East president Mwalulu Mwalala has sent his condolences to the bereaved and declared a three day mourning period.

11:00am – Latest reports say that at least 40 injured have arrived at Kala Referral Hospital in 7 Police Land Rovers. More Details to follow

10:50am – Kala Fire Department Chief Alan Miruki  insists that had it not been for Gibo’s bad roads, their trucks would have been there ten minutes after the outbreak of the fire

ala Police Boss Stephen Owenguni reveals that the problem is even bigger. 30 people confirmed dead, 10 among them children and the elderly. At least ten thatched residences have been razed. The fire department is yet to arrive but Mr Ownguni confirms on hist two-way that the firetrucks are on their way.The injured are being rushed to the Kala Referral Hospital. The fire, says Mr Owenguni  is suspected to have started when gas leaked from the village biogas project, and was exacerbated by an open wood fire, also at Gibo’s communal kitchen.

10:40am – Reports from Eastern Gibo say that at least ten people are feared dead in a freak morning fire in Gibi a remote village of Kala, Eastern Gibo republic. .

It was a cold, cold day

And I heard my neighbour say:

Njeri, Njeri…May I have some sugar

So I came out running in my shuka

I said: “No Neighbour, I have none

But of Honey I have one

Then may I have some of that?

He said, But then my honey pot fell flat

And it spread all over the floor

And he stood right there  at the door

And right behind my friend

Stood a man with dirt on hair’s end

With his wife at his side

Whose face was sorrow’s tide

The man drew out his Knife

Too late is what she was

As the blade punctured and ran its course

Gutting my friend from hip to hip

Causing him to groan and tip

And as the man with dirt on hair’s end

Smiled with eyes of sorrow lent

Knowing that I, was next in line

I shut the door, just in time

The world was a very mean place for Ralph Roberts. But for all the bad things that happened, there was Carolyn to make things better. She loved him, and watched over him and just when he thought that Nothing could go wrong after 35 years of bliss with her, she got cancer and died.